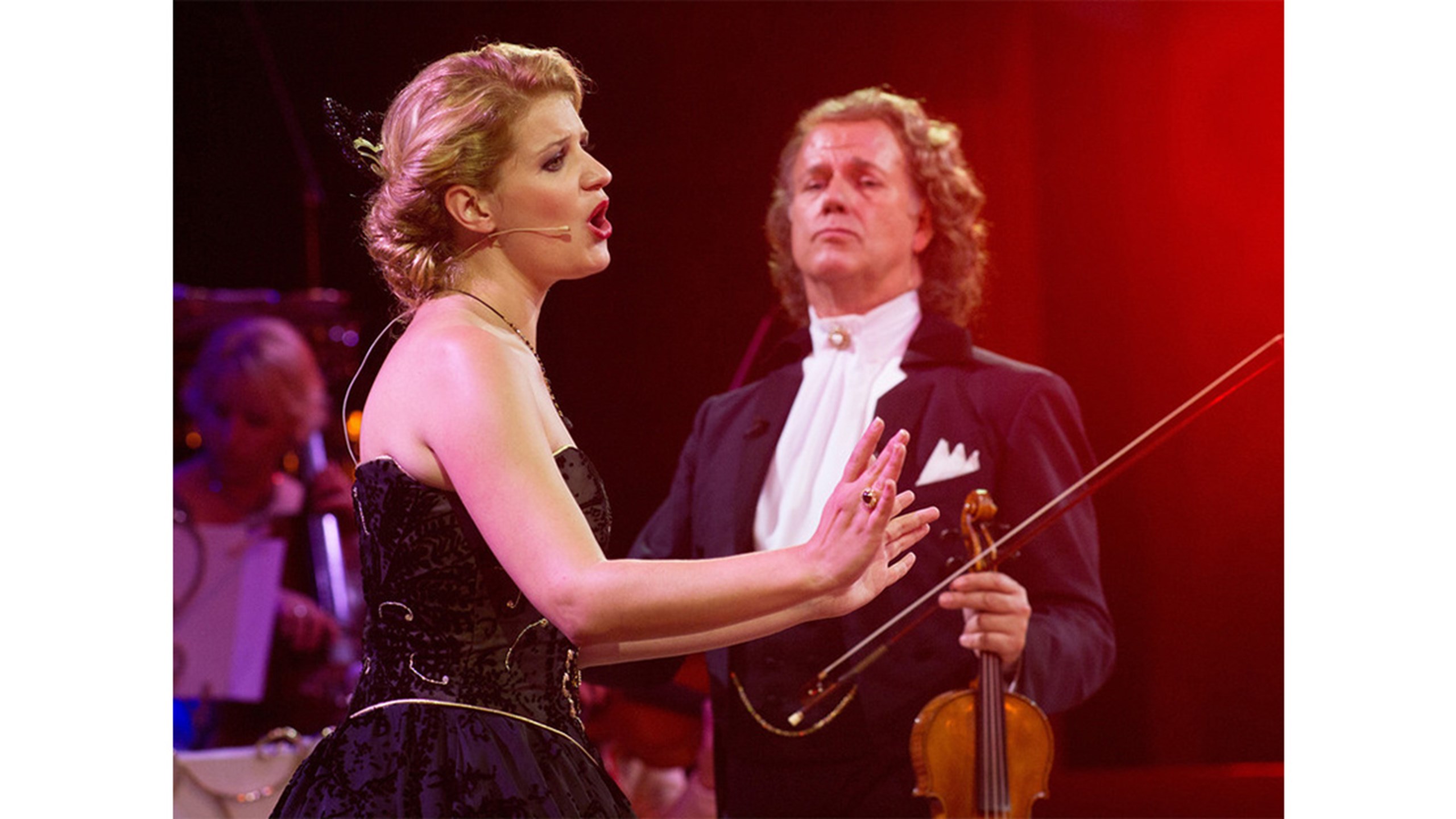 Australian born soprano Mirusia is known to millions around the world as the "Angel of Australia" - the name given to her by the famous Dutch violinist André Rieu, with whom she has toured for over 10 years.

Mirusia is one of the most sought after sopranos in the world, and her albums always place highly on the ARIA Album and DVD chart rankings, with numerous albums and DVDs reaching the number one position on the Pop, Classical Crossover, Jazz & Blues and Music DVD Charts in Australia. Her 2019 album ‘A Salute to The Seekers’ debuted at the #1 position on the ARIA Jazz & Blues Chart, and her latest album ‘Mirusia Live In Concert’ also debuted at #1 on the ARIA Classical Crossover Chart.

Originally scheduled at Blue Mountains Theatre in 2020, Mirusia’s live show ‘A Salute To The Seekers & The Classics’ has been postponed twice due to the ongoing covid-19 pandemic and is now scheduled for 17th November.
We checked in with Mirusia recently to see how she is coping with another year of covid-disruptions and find out what she's been up to.
𝗧𝗵𝗲 𝗽𝗮𝘀𝘁 𝟭𝟴 𝗺𝗼𝗻𝘁𝗵𝘀 𝗵𝗮𝘀 𝗯𝗲𝗲𝗻 𝗶𝗻𝗰𝗿𝗲𝗱𝗶𝗯𝗹𝘆 𝗱𝗶𝗳𝗳𝗶𝗰𝘂𝗹𝘁 𝗳𝗼𝗿 𝗽𝗲𝗿𝗳𝗼𝗿𝗺𝗮𝗻𝗰𝗲 𝗮𝗿𝘁𝗶𝘀𝘁𝘀. 𝗛𝗼𝘄 𝗵𝗮𝘃𝗲 𝘆𝗼𝘂 𝘀𝘁𝗮𝘆𝗲𝗱 𝗽𝗼𝘀𝗶𝘁𝗶𝘃𝗲 𝘁𝗵𝗿𝗼𝘂𝗴𝗵𝗼𝘂𝘁 𝘁𝗵𝗶𝘀 𝘁𝗶𝗺𝗲?
It has been harder than most people think it has for the performing arts and keeping positive is just so important. I have found that talking to my friends in the arts, looking forward to new projects and learning new songs has kept me positive. The best part has been the fact that I could spend a lot more time with my family than ever before. I have been really enjoying this time with them and keep my mind focused on the positive, rather than the negative.

𝗛𝗮𝘃𝗲 𝘆𝗼𝘂 𝗯𝗲𝗲𝗻 𝘄𝗼𝗿𝗸𝗶𝗻𝗴 𝗼𝗻 𝗮𝗻𝘆 𝗲𝘅𝗰𝗶𝘁𝗶𝗻𝗴 𝗽𝗿𝗼𝗷𝗲𝗰𝘁𝘀 𝘁𝗵𝗮𝘁 𝘆𝗼𝘂 𝗰𝗮𝗻 𝘀𝗵𝗮𝗿𝗲 𝘄𝗶𝘁𝗵 𝘂𝘀?
In February, we were so fortunate in Queensland to go back to 100% capacity in venues and I managed to record a new live album and DVD during this time. We released it in June and it has been selling really well and even debuted at #1 on the charts here in Australia. This was super exciting after almost a year of nothing. We are now working towards new plans for 2022 and it’s actually nice to have the time to plan it out in detail!

𝗬𝗼𝘂’𝘃𝗲 𝗽𝗲𝗿𝗳𝗼𝗿𝗺𝗲𝗱 𝗶𝗻 𝗳𝗿𝗼𝗻𝘁 𝗼𝗳 𝘀𝗼𝗺𝗲 𝘀𝘁𝗮𝗴𝗴𝗲𝗿𝗶𝗻𝗴𝗹𝘆 𝗵𝘂𝗴𝗲 𝗮𝘂𝗱𝗶𝗲𝗻𝗰𝗲𝘀 𝘄𝗵𝗲𝗻 𝘁𝗼𝘂𝗿𝗶𝗻𝗴 𝘄𝗶𝘁𝗵 𝗔𝗻𝗱𝗿𝗲 𝗥𝗶𝗲𝘂. 𝗗𝗼 𝘆𝗼𝘂 𝗽𝗿𝗲𝗳𝗲𝗿 𝗹𝗮𝗿𝗴𝗲 𝘀𝘁𝗮𝗱𝗶𝘂𝗺 𝗰𝗼𝗻𝗰𝗲𝗿𝘁𝘀, 𝗼𝗿 𝗺𝗼𝗿𝗲 𝗶𝗻𝘁𝗶𝗺𝗮𝘁𝗲 𝘀𝗵𝗼𝘄𝘀? 𝗗𝗼 𝘆𝗼𝘂 𝗲𝘃𝗲𝗿 𝗴𝗲𝘁 𝗻𝗲𝗿𝘃𝗼𝘂𝘀 𝗯𝗲𝗳𝗼𝗿𝗲 𝗽𝗲𝗿𝗳𝗼𝗿𝗺𝗶𝗻𝗴?
Stadium concerts or intimate concerts are both a very different vibe, of course. I love them both the same but for different reasons. Stadium Concerts mean everything is very “Extra”. It’s like an intimate concert on steroids! One thing stays the same though - the performance has to always be of a high quality and to your best ability if you are performing for 30000 people, 3000 people or 300 people. The thing that has been fun this past year with more intimate concerts, has been the opportunity to directly speak to the audience and actually interact with the lovely people who have come to have a great night out. I have learnt a lot about some of the places in Australia whilst being on stage!

𝗬𝗼𝘂’𝘃𝗲 𝗮𝗹𝘀𝗼 𝗽𝗲𝗿𝗳𝗼𝗿𝗺𝗲𝗱 𝗼𝗻 𝘀𝘁𝗮𝗴𝗲 𝘄𝗶𝘁𝗵 𝗧𝗵𝗲 𝗦𝗲𝗲𝗸𝗲𝗿𝘀. 𝗪𝗵𝗮𝘁 𝗶𝗻𝘀𝗽𝗶𝗿𝗲𝗱 𝘆𝗼𝘂 𝘁𝗼 𝗿𝗲𝗰𝗼𝗿𝗱 𝗮𝗻 𝗮𝗹𝗯𝘂𝗺 𝗼𝗳 𝘁𝗵𝗲𝗶𝗿 𝗺𝘂𝘀𝗶𝗰, 𝗮𝗻𝗱 𝗰𝗿𝗲𝗮𝘁𝗲 𝘆𝗼𝘂𝗿 𝘀𝗵𝗼𝘄 𝗔 𝗦𝗮𝗹𝘂𝘁𝗲 𝗧𝗼 𝗧𝗵𝗲 𝗦𝗲𝗲𝗸𝗲𝗿𝘀 and 𝗧𝗵𝗲 𝗖𝗹𝗮𝘀𝘀𝗶𝗰𝘀?
It seems as though my life has been always revolving around the music of The Seekers. When I was a young girl my dad brought home a stack of CDs and one of them was The Seekers 25th Anniversary Album. He sat me down and said that he was sure their music would be a great influence on me. Well, he was right! I sang “I Am Australian” at school, and then at events, later toured alongside them with Andre Rieu and then in 2018 my manager, Robert Rigby, suggested to do an album of their music. I thought it was a very good idea considering I have always been a fan and sung their music. All four of The Seekers were involved in their own special ways and in 2019 I was lucky enough to tour with the boys (The Original Seekers) in a Double Bill tour around Australia and was welcomed on stage as a new member of The Seekers family. I am very proud of that. Who would have thought, the 8 year old girl who choreographed dances in the living room in Brisbane to Georgy Girl, would one day stand on stage WITH The Seekers and sing that song. Absolute pinch me moment!

𝗪𝗵𝗮𝘁 𝘀𝗼𝗻𝗴 𝗯𝘆 𝗧𝗵𝗲 𝗦𝗲𝗲𝗸𝗲𝗿𝘀 𝗶𝘀 𝘆𝗼𝘂𝗿 𝗳𝗮𝘃𝗼𝘂𝗿𝗶𝘁𝗲 𝘁𝗼 𝗽𝗲𝗿𝗳𝗼𝗿𝗺, 𝗮𝗻𝗱 𝘄𝗵𝘆?
All of their music is incredible and I really enjoy them all, but in particular I love singing “The Carnival is Over”. It is such a hauntingly beautiful tune. So timeless with such gorgeous phrases.

𝗛𝗮𝘃𝗲 𝘆𝗼𝘂 𝗵𝗮𝗱 𝗮𝗻𝘆 𝗽𝗮𝗿𝘁𝗶𝗰𝘂𝗹𝗮𝗿𝗹𝘆 𝗺𝗲𝗺𝗼𝗿𝗮𝗯𝗹𝗲 𝗺𝗼𝗺𝗲𝗻𝘁𝘀 𝘄𝗵𝗶𝗹𝘀𝘁 𝘁𝗼𝘂𝗿𝗶𝗻𝗴 𝘁𝗵𝗶𝘀 𝘀𝗵𝗼𝘄?
Every performance something will happen, we will have someone call out something funny, or something crazy will happen backstage. This tour has been on the road since 2019 now and we have had many special guests on this tour so far which has been really fun, including my childhood friend Lachlan Gillespie who is the Purple Wiggle. I have really been enjoying visiting cities I have never had the chance to tour to before.